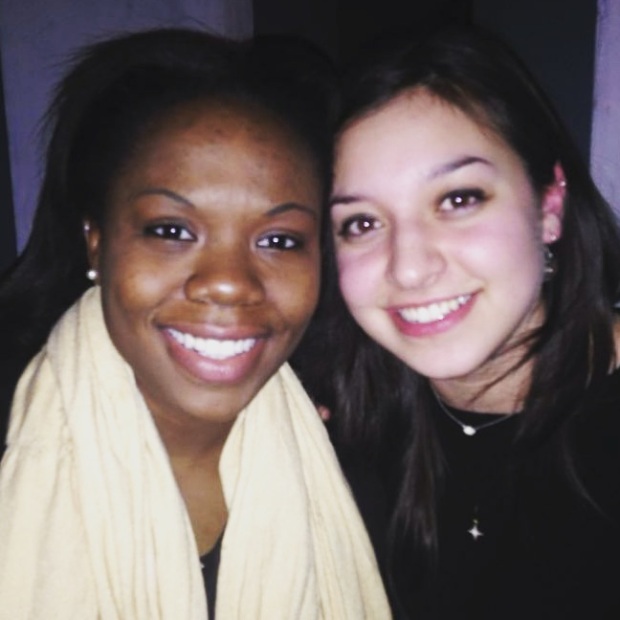 Sara Rahimi (right) is a PoliSci Major at Kenyon College.

The Graduate is a new blog feature considering college majors, graduate school, and a look into career options beyond higher ed. Are you a young college or graduate student who wants to be featured next? Tweet us @PetalAndSass or email petalandsass@gmail.com for more information!

What factors led you to choose the college you attend? Financial aid, size and location.

Did you enter college knowing exactly what you wanted to major in, or did this change for you over time? I had some idea I wanted to pursue international studies, political science or even sociology. I also thought I would pursue natural sciences. I partially chose a liberal arts school because I am all over the place academically; I have strong math and science skills as well as analytical writing skills. Similarly, my interests lie in the social sciences and the intersection of natural sciences with social sciences.

What are your reasons for choosing a Political Science major? Even though I attend a liberal arts school, there is not as much flexibility as I would have hoped for in taking a variety of courses. My college requires sophomores to declare their major by the end of first semester. At the time, my parents thought I may need to graduate early for financial reasons, so the only majors I could choose from – given my then history of classes – were political science or philosophy.

What do you enjoy most about the classes in your field? Conversely, what is the hardest aspect? Part of the reason I love the field of political science is the fact that it is inherently problematic. Many American colleges, especially those that fall under liberal arts, are critiqued for teaching western curriculums. You may major in philosophy where the introductory course covers ancient Greek/Roman philosophies; the school may offer eastern philosophy courses, but they are typically labeled as such in the title of the class. This is just one example, but at Kenyon you see a very western curriculum amongst all fields of study whether it be English or women’s and gender studies etc.. The field of political science is rooted in western philosophy. It proposes ideal methods of life from structuring society and governance to interacting amongst the global world stage as a state or individual. There are international relations and comparative politics amongst other categories within the field; nonetheless this academic area of study is Eurocentric in origin. The political analysis of the discipline is construed through a western lens regardless from where the political scientist is. The majority of ancient/classic political thinkers and thus ancient political philosophies are western yet they pursue the best possible political practice for all. This is not to say that there weren’t non-western political thinkers throughout ancient and contemporary history. However, such perspectives were not incorporated into the field of political science. Therein lies the controversy of the field. In excluding the non-western/European, how can the discipline evaluate the political behavior of non-western regions much less promote theories of good governance globally? The field abandons non-western outlooks but seeks comprehensive universals.

What type of person would you say excels in your academic field? Unfortunately you must make it far in the field before you really can question what it rests upon. Therefore I find that white, heteronormative males succeed the most. However, this depends on how you measure success. Here I have measured success as that of subscribing to the norms set forth by the discipline and being able to apply them. Identities which face some sort of oppression tend to push back on popularized theories and analyses of the field. This behavior is welcomed to a degree, although I feel as if it is welcomed pretty late in the game.

What career do you hope to gain with your degree? This is something I am constantly asking myself. I have plenty of interests such as social work, public policy, journalism (domestic or international). I always used to say that I want to earn a law degree and work for the ACLU—which would be awesome, but I question this path. What I have come to learn is that my undergrad experience has made my all-over-the-place personality even more directionless. It has opened my eyes to many new areas of study and further broadened my interests, but I failed to seek focus. What is most difficult for me is that I love how all aspects of life, as with all areas of study, relate. Natural sciences and the humanities relate just as much as calculus and physics. I love this, but it is hard to find a career path that deals with the relation and application of a variety of disciplines.

Have you participated in any related internships or summer jobs? For two summers and winter breaks, I have worked for a law firm in New York City. Other than that, my vacation employment was rather unrelated to my areas of study.

What’s next? Do you plan to attend graduate school, or can you enter work in your field straight out of college? I plan to enter the work field immediately after college, although it may not be in my field of study. I have plans of attending graduate school but I feel I need a break before continuing my education. I also need to tackle some of my student loans ☹.

What advice would you give a high school student or college freshman about choosing a major? Try not to think about a possible major during your first year unless your potential undergrad career requires four years of training (e.g. some pre-med programs). Instead, take this time to really explore foreign areas of academia. Don’t be afraid to skip the intro level courses too! They are certainly useful in laying down a foundation, but they are not always indicative of the nature of the field. The upper level courses may explore more specific areas of the field and tend to apply the material more—not to mention they are usually more interesting. Also, try to develop some sort of relationship with a professor or faculty member. Even if you don’t like their class or area of study, they can help structure your college experience as best fit for you.

What advice would you give younger students about college life in general? Try not to be hard on yourself. This is a time when it is encouraged not to know yourself. You are growing and constantly changing. Push yourself to attempt the unknown. Seek help even if you don’t think you need it. Work hard but also play hard. Yes, for you, grades may matter, but the collegiate experience is also about how to form relations and work with individuals. In other words, it socializes you to some extent. This aspect of college should not be taken lightly because one’s studies will only take her so far. Academically you ought to understand the structure of your college/university. Befriend the registrar!! They are not evil. You may get away with fudging some academic policies if you use the registrar as a tool.

2 thoughts on “The Graduate: Majoring in Political Science”